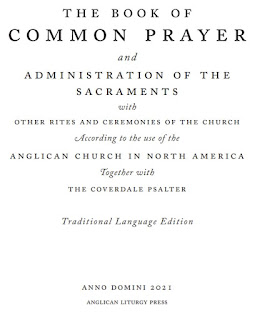 After spending a day working through the liturgy, comparing to 1928 and 2019 Modern, as well as 1662, I find that 2019 TLE Holy Matrimony with Holy Communion is much less clunky than the 1928, which doesn't necessarily expect Holy Communion to follow. I find the Litany is a little awkward to read, but in use is quite nice and consistent with more participatory lay/congregational focus of the 2019 vs 1928.

I am so far impressed with the Traditional Language version of the ACNA texts. The TLE preference, where possible, for 1662 / 1928 word choice, phrases, and prayers makes it feel more rooted to the Historic Prayer Book tradition.

From the Preface to the Traditional Language Book:

My conclusion from this philosophy and a commendable application of it is that this is a better, more historically consistent Prayer Book to be the provincial book. It upholds the Prayer Book committee's aim to produce an evolutionary set of liturgies, not a revolutionary set.

The Traditional Language version should have been "The ACNA Prayer Book," with explicit allowances and materials, even encouragement offered for the present 2019 liturgies. This would be akin to An Anglican Prayer Book offered by the Prayer Book Sociery, edited by Peter Toon.1 The REC also offered similar, pre-ACNA, with their own prayer book.

To have switched the Modern for Traditional (with the three points above) would have put the ACNA far more in line with the Historic Prayer Book lineage, built bridges with the Continuing Church and existing 1928 traditional parishes, and made a prominent ecumenical/cross-provincial statement about the value of the 1662 standard used in GAFCON churches. In my experience, most churches that use modern language liturgies are comfortable with booklets, etc; even modifying liturgies to suit their particular mission contextualization. Traditional churches generally do not operate with those liberties. To be clear: the 2019 book is a good book, most especially if one is coming from a 1979 background, which most in the ACNA probably are. While I believe that a return to traditional languages--with a modern language prayer book option--would have been better, I do understand the rationale of adopting the liturgies as they have been. Otherwise, a great many parishes might not have switched so readily from 1979.

For this booklet, embedded below, I removed some rubrics when optional, some words replaced for clarity to the reader (Minister throughout, and then celebrant when at Holy Communion). Prayer of Humble access rubric reverted to 1928 because of the situation for this particular service.